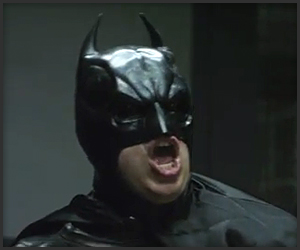 If you have ever doubted the importance of eloquence in speech, then read on dear reader. Read on.

There is a moment in The Dark Knight when Batman apprehends a group of vigilantes dressed up as Batman. "What's the difference between me and you?" they ask. "I'm not wearing hockey pants," Bat-Bale growls.

Atleast it sounded like that. Or was it hockey pucks? Of course both of those don't make any sense. What he was actually saying was, "I'm not wearing hockey pads." Forgive us for not laughing - the joke was lost in translation.

Christian Bale's approach to Batman is to act as if he were real. Part of his thought process included the idea that Batman would have to disguise his voice to protect his secret identity. The voice should also reflect the idea that Batman is a symbol to strike fear in the heart of criminality. The result is an almost animalistic rumbling that, in fairness, would indeed induce fear if it weren't so incomprehensible to the listener.


Look no further than the Joker interrogation scene in The Dark Knight for proof. It happens again with Bane in The Dark Knight Rises and the result is glorious. Bat-Bale launches into a beyond mythical tirade screaming, "WHERE IS THE DETONATOR BANE, WHERE IS IT?" If there ever was a need to type something in all-caps, this is it.

Alas, the The Dark Knight Rises marks the end of one of cinema's greatest movie trilogies, and with it, Christian Bale's Bat-voice. Whether you love or hate the voice, it will always be remembered.