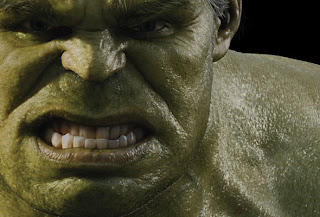 My favorite moment in the Avengers movie happens when the enemy army is invading New York, whereupon Captain America instructs Dr. Bruce Banner to get angry so he can transform into the Hulk. Banner replies, "That's my secret, Cap. I'm always angry."


Wow. That short moment takes The Hulk character into a whole different level. Prior to that point, we operated on the assumption that Banner transforms into The Hulk only when you make him angry. But then we discover that The Hulk has a deep-seated anger in him, and it takes an incredible amount of discipline and self-control just to function as a normal human being, in this case, by not transforming into The Hulk.

Instead of thinking of anger as a reaction to some external event, we get a glimpse into the quiet everyday struggle The Hulk faces with his anger issues, his internal emotional state, if you will. This shows us that our perception of anger may not be as simple as we might have thought.

This portrayal of The Hulk character implies that one way to deal with inner anger is to lose control and find an outlet for that anger. For Bruce Banner, this means transforming into an indestructible green giant and smashing things!

The question then is: is this a healthy way to manage anger? The answer: Of course not. For one thing, Banner is still always angry. I'm sure he feels a whole lot better after hurling tanks across the street, but it's clear that his inner anger has not abated - it still resides deep in him.

The healthy way, in my opinion, is to find out the cause of the inner anger and work towards resolving that issue. It might not be as fun as Banner's method, heck, it's not fun at all, but that's what happens when the anger is rooted deep inside you.

But oh what the heck. Seeing The Hulk destroy things is just so much fun. Maybe it doesn't hurt to just, from time to time, to go, ME, SMASH!